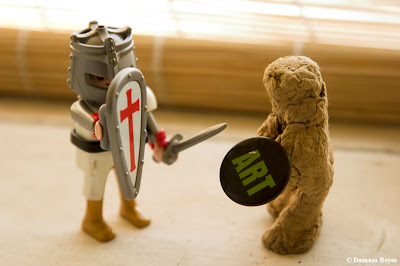 When I got here the plan was to make 100 sheets of paper a day until I'd made 1000 sheets. That's all very well and good but I am in another city. So in the meantime I've also been doing my best to embrace my enviornment. Meeting artists in the factory, drinking vodka, smoking too many rollies (indoors), going to Prisma, eating Kalev, having Youtube parties, having Eurovision parties, hand washing clothes cos the washing machine is bust, making tea, documenting Smell City, I mean there's just no time.

Before I got here I started reading a Jaan Kross book The Czar's Madman and somehow one day I started to make little people (affectionately known as poopman). I introduced Poopman to the people of Tallinn at a story telling open mic night at Von Crawl Theatre and he's been hanging out at the factory since.

On Saturday we had a pin hole photography workshop and poop man got himself in a fight about art. He thinks he's a proper good artist cos he does perform ace and he's at all the cool parties. But is he a real artist if he's just made of paper.

Paper is boring. There's no real guts in that. It's not controversial. It's not expensive enough to be art. You don't even have to have a concept to make a sheet of paper. But still poopman fights on. Stickin to his guns (or shield as the case may be). So is their any point in making 1000 sheets of paper?
Posted by Rebecca Strain at 14:24

Rebecca Strain
is in love with paper.